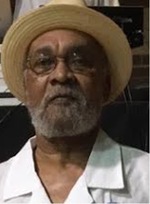 In a house in a little town known as “Dutch Bayou” in Reserve, LA, Wilbert Johnson, Jr. was born on June 17, 1944 to the union of the late Wilbert Johnson, Sr., a Frenchman, of Edgard, LA and the late Alberta Traville Johnson of Lutcher, LA. He was the sixth of ten siblings, five sisters and four brothers. Wilbert entered eternal rest on Thursday, February 4, 2021 at the age of 76.

Wilbert accepted Christ at an early age and was baptized by the late Rev. Wesley Anderson Sr., at Beech Grove Baptist Church in Reserve, LA, currently under the pastoral ship of Pastor Cory Batiste. He served as a dedicated member on the usher board. He was a faithful servant in spite of the pandemic and the declining of his health until his passing. His
favorite bible scripture was John 3:16 “For God so loved the world that He gave his only begotten son, that whosoever believeth in Him should not perish, but have everlasting life”.

Wilbert attended Rosenwald Elementary School in Dutch Bayou. He later went on to attend Fifth Ward High School where he graduated in 1963. After graduating high school, Wilbert aspired to one day join the United States of America Military and enlist in the Air Force. Due to health complications at a young age, he was unable to follow his dreams. Though, he was detoured from his military path he was more determined to create a great life for he and his growing family. While on this new journey, Wilbert was hired for his first real job at Schwegmann Grocery Store in Metairie, LA. He once expressed how much he enjoyed that job and it was the easiest he’d ever had. While working at Schwegmann he was able to purchase his first car, which was a 1959 blue Chevrolet Impala. When talking about this car, you were able to see and feel how much joy it brought to him.

In 1968, Wilbert was employed by Avondale Shipyard in Westwego, LA where he worked in the paint department and gradually moved on to become a first class fitter and later a foreman. Also in 1968, Wilbert began to have children with his high school sweetheart and first wife, Rita Mae Jones Johnson. To their union were four girls and three boys; Alecia and Chandrika Johnson of LaPlace, LA, DeLois Johnson of New Orleans, LA, Danielle Johnson-Davis (Michael) of LaPlace, LA, and the late Dartania, Morial, and Randy Johnson. Although this union ran its course over the years, Wilbert and Rita humbly remained the best of friends and continued to grow closer as buddies until his passing.

He was known to be a kind, gentle, family man. However, during this difficult life changing experience, this journey took he and his older brother Wallace to 3rd Street in Uptown New Orleans, LA, where they were welcomed and neighborly to all. There, they became independent contractors and worked as painters for many years. Dear loved ones, friends and associates were plentiful in their new little community. They lived to where if one had, the other had. Until one day, life took another turn that led them back to Cornland in Reserve, LA.

In 1999, Wilbert was joined in holy matrimony to a newly found love named Gail Moss Johnson of New Orleans, LA. To that union a beautiful baby girl named Bianca Racquel Johnson was born.

While back in Reserve, LA, with his entire family, Wilbert made a career change and landed a job as a supervisor at Shell Refinery in Norco, LA, where he worked as a hydro blaster operator and then driving trucks until he retired.

Wilbert made a conscious decision to dedicate his life as a devoted grandfather. He was able to enjoy grandparenthood and was able to attend and participate in activities and provided the male support when and if necessary. Wilbert had 13 grandchildren and 4 great grandchildren. During an interview with his granddaughter Diamond, she felt compelled to ask him “what made him most proud of his children”. Wilbert became extremely emotional and asked for a moment. When responding to that question, he expressed that he was most proud of their success and emphasized, “ all of my children are independent and most are homeowners”. He said with such gratitude “my girls purchased homes on their own”.

Wilbert was once a Mason, a member of the Mellow Fellows Social Aid and Pleasure Club, Xavier University Preparatory Dad’s Club, 3rd/4th Street Neighborhood Reunion, a proud supporter of Kelly’s School of Dance and a member of several Saints Clubs, etc. Wilbert was an avid Domestic and International traveler. His most talked about trips were to Okinawa, J-A-P-AN, Washington, DC and Las Vegas, NV. He was a sports fanatic in which he enjoyed fishing by the banks of a river or a charter, golf, tennis, basketball, baseball, and moreover football. The New Orleans Saints were number 1 to him, no matter what. He was also a season ticket holder for many many years.

Due to CDC (COVID-19) guidelines and restrictions, masks and social distancing are REQUIRED!