To share your memory on the wall of Tramaine Harrison, sign in using one of the following options:

Tramaine Antonio Harrison was born on March 24, 1979 to the union of the late Antonio Harrison and Sandra Lewis Harrison. He was baptized at Mt. Calvary Baptist Church as a child and at the age of twelve, he converted to Catholicism. He has been a member of St. James Catholic Church since that time.
Tramaine graduated from St. James High in 1997. He attended McNeese State University on an athletic football scholarship and later graduated from Nicholas State University in 2016, earning a degree in Political Science. Tramaine was also a member of the Alpha Phi Alpha Fraternity. After college he went on to work with the youth. He was employed by Rivardi Juvenile Detention Home for several years. He continued to work with the youth whenever time permitted. He also worked in the retail industry.

His passion was writing songs and poetry. He would often share his work with the family. When he was not writing, he was enjoying family time, giving out hugs and kisses to everyone. He was a big sports fan, but football was number one for him.
He leaves to cherish his memories his mother Sandra Lewis; one daughter, Destini Tranae Catchings of Morgan City, LA; one son, Trenton Tramaine Harrison of Houston, TX; his Fiancée, Dominque Albert of New Orleans; her two children, Royal Lemon and Dominick Lemon; his twin sisters, Ebonea Harrison and Ebonee’ Harrison; his maternal grandparents, Oscar Lewis Sr. and Anita Lewis; his uncles, Oscar Lewis Jr. (Carlette) of Vacherie, LA, Altora Lewis of St. James, LA, Lawrence Harrison (Tonette) of Houma, LA, Craig Harrison (Delores) of LaPlace, LA, Mark Harrison (Glorinell of Thibodaux, LA, and Terrence Harrison of Vacherie; his aunts, Audrey Lewis-Sandolph of St. James, LA, Lordez Armant-King of Vacherie, LA, Clarissa Peterson of Gramercy, LA, Margie Jackson, of Gonzales, LA, Denine Smith (Terry) of Hahnville, LA, Darlene Narcisse, Charlene Harrison, Erica Johnson and Tameka Isom (Farrell) of Vacherie , LA, Debra Robinson (Ronald) of Donaldsonville, LA, Angela Johnson (Cleveland) of Gary, LA and Ashley Zenon of Plano, TX and a host of nieces , nephews, relatives, and friends.
He was preceded in death by his father, Antonio Harrison; his paternal grandparents,
Lawrence Harrison Sr. and Audrey Dillon-Harrison; his maternal great-grandparents, Septeme and Laura Mitchell Jr. and his cousin, Kennie Harrison.

To plant a memorial tree in honor of Tramaine A Harrison, please visit our Heartfelt Sympathies Store.

We encourage you to share your most beloved memories of Tramaine here, so that the family and other loved ones can always see it. You can upload cherished photographs, or share your favorite stories, and can even comment on those shared by others.

Posted Oct 11, 2019 at 04:15pm
My condolence to the family. May the Lord continue to hold you and comfort you through this time. We love you all and will continue to pray for the family. 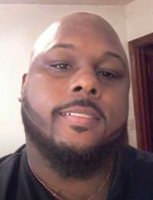