To share your memory on the wall of Ruth Kelly, sign in using one of the following options:

Ruth Ann was raised in a Christian home, and while in her teens, Ruth Ann accepted Jesus Christ as her Lord and Savior. She was baptized at A.M.E. Zion Methodist Church in Burlington, North Carolina.

After graduating from Jordan Sellars High School in 1959, Burlington, North Carolina, Ruth Ann moved to Amityville Long Island, New York. In 1962, she became a member of Zion Gospel Church located in Copiague, New York.
Ruth Ann was known as a powerful soprano and sang solos at her local church. She later joined the choir at the Mount Calvary Holy Church in Huntington, touring New York and neighboring states.

Ruth Ann worked as a paraprofessional educator in New York, Florida, and finally in Orangeburg, South Carolina. During her years as an educator, she taught braille to Gregory Carson for nine years. Even after retiring, she continued as a caregiver sitting with the elderly.

She was preceded in death by her parents, four brothers: Jerome, Walter, Alfonso “Freddy Boy” and Richard Clinton, and three sisters: Rachel and Ruby Clinton and Lucille Clinton McLain.

All neighboring communities and churches are invited to join the family for a Celebration of Life on Thursday, January 23, 2020 at Destiny Christian Center 612 Main St, Laplace, LA 70068 at 10:00 am. Visitation begins at 9:00 am. Interment will follow at Providence Memorial Park and Mausoleum 8200 Airline Dr, Metairie, LA 70003. Final care entrusted to Treasures of Life Funeral Services, 315 E. Airline Highway, Gramercy, LA 70052.

To send flowers to the family or plant a tree in memory of Ruth Ann Kelly (Clinton), please visit our Heartfelt Sympathies Store.

Receive notifications about information and event scheduling for Ruth

We encourage you to share your most beloved memories of Ruth here, so that the family and other loved ones can always see it. You can upload cherished photographs, or share your favorite stories, and can even comment on those shared by others. 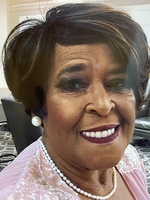