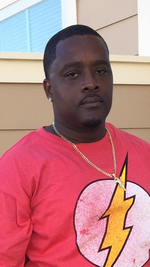 A United States Army homemaker, a faithful girls dad and a loving family man, Randy Demonian Johnson entered into eternal rest at the age of 41, after departing this earthly life of natural causes/heart attack at his residence in Temple, Texas on Tuesday, April 28, 2020.

Randy was born on the 23 day of March 1979 to the union of Rita Mae and Wilbert Johnson Jr. Randy was a native of Cornland in Reserve, Louisiana. He accepted Christ at an early age and was baptized at Beech Grove Baptist Church in Reserve, LA. by the late Rev. Wesley Anderson Sr.

He was a graduate of East St. John High School in Laplace, LA (class of 1998). After high school, he attended Grambling State University in Ruston, LA. In 2001, Randy was joined in matrimony to the love of his life, now former wife, Sergeant First Class Alisha “Ziggy” Johnson. To that union, were born two precious daughters, Alicia Miracle Johnson and Rhiana Denae Johnson.

Randy’s life as a husband/father included full-time support to his family at military installations across the world to include: Fort Knox, Kentucky (Alicia’s place of birth) Louisville, Kentucky 2000-2002; Fort Gordon, Georgia (Rhiana’s place of birth) Augusta, Georgia 2003-2006; Hohenfels, Germany 2006-2009; Fort Campbell, Kentucky 2009-2013; Fort Carson, Colorado 2017-2018. Between travels in 2009, along came Shi, a female Pomerania, family puppy, a surprise for the girls which signifies the true #GIRLDAD he was.

While traveling across installations, Randy worked as a forklift operator and in between duty stations he worked at DuPont in Reserve, LA and Shell Refinery in Norco, LA to support his family.

When Randy officially returned to his native hometown, he made a conscious decision as to what he needed and wanted to do for the next phase of his life and therefore he decided he wanted to obtain his Commercial Driver’s License (CDL) in which he did. So proud he was of his accomplishment, if you knew Randy, you saw it in his signature smile.

Once Randy received his certification, he became a cross country driver for Swift Transportation Company. Now in the system and understanding policies, Randy began to weigh his options and realized that this opportunity can and will put him closer to his girls. Therefore, he transferred his cross-country travels to Swift Transportation Co. dedicated to Walmart in Temple, TX that would keep his routes between Texas borders.