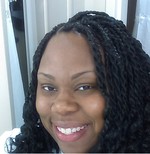 La Shana Nicole Mitchell-Bell a native of New Orleans, Louisiana transitioned from this life on Thursday, April 25, 2019, at the age of 39 years old.
Born to the union of Lucien & Geraldine Mitchell on June 8, 1979. La Shana Nicole was affectively called Nikki. She was the middle child- her only brother Brandon Corey “Akil”, and her sisters Michela and Monique.
Nikki accepted the Lord as her personal Savior at an early age. She was baptized at New Kingdom Missionary Baptist Church under the leadership of the late Pastor Joseph Merrell.
She was educated within the Orleans Parish School System. She was a studious student and a graduate of Mc Donogh 35. Class of 1998. After graduating high school she attended LSU for two years. She then transferred her studies to Tulane University where she acquired her Associate’s Degree.
As she grew over the years, during the late 90’s while in High School, she joined at that time the Beacon Light Missionary Baptist Church, under the leadership of Elder Darryl S. Brister. While sitting under the teachings at Beacon Light she began to mature and grow in the Word of God -she decided to get baptized again at Beacon Light International Baptist Cathedral under the leadership of Bishop Darryl S. Brister. She developed the heart of a servant. She served faithfully at the Cathedral, BL of Houma and BL of LaPlace.
Nikki was a loving, caring, self-less person. She was genuine in all her relationships. She was an encourager by nature. Always positive in speech and thought. Her love for Ladybugs was known to all. She believed God hears and God answers prayers. Regardless of any situation she assured that Happiness is on the way.
On July 25, 2011 she became a first-time mom to a bouncing baby boy name Derrick Gerard ‘DJ’ Kellman, Jr. He was her first love. She loved and nurtured her son in a phenomenal way. Her love for DJ is indescribable. She was a great mother!
And then she fell in love, on October 11, 2015 she wed in Holy Matrimony to John Bell, Sr. The love shared between her and her husband was very special. To this union she gave birth for a beautiful baby girl name Jazmyn Grace and another bouncing big boy name Elyjah Jax.
Nikki worked at different Learning Facilities down thru the years- in particular, LaPetit Academy and Kidopolis Academy. She worked for Firstline School System. Most recently she was employed at Arthur Ashe School- her current position was the 2nd Grade Special Education D Teacher. Words cannot describe the love and passion she had for her students, parents and co-workers.
She loved to cook various dishes; she was a real Earthly Angel. Her passion was working kids. Always displaying a motherly figure and being a Godly example to all her friends, family, students and parents. She really was a sweet person that loved everybody. Serving in ministry became a joy to her. Sharing God’s Word was her lifestyle. She believed God and stood on every promise.
She was preceded in death by her grandparents Louis & Corneila Mitchell and A.B & Argie Mae Coleman; her aunts Melvola Mitchell, Claudette Mitchell and Bobby Cooley; her uncle A.B Coleman, Jr, A.C Coleman and Ruff Coleman.
She leaves to cherish her memories her loving husband John Bell, Sr, her darling three beautiful kids DJ, Jaz & EJ; her kids by marriage Kaylin, Kiara, Jada & John Bell, Jr.; her loving parents Lucien & Geraldine Mitchell; her siblings Brandon Akil Mitchell, Michela Gilmore and Monique Mitchell. Her aunts Ella “Lil Bit” Crawford, Verlean “Mamie” Davis, Sandra (Jimmy) Cooley, Corneila Mitchell, Bernadine (Howard) Mitchell, Her uncles Louis (Diane) Mitchell and Claude (Lynn) Mitchell. Five nieces, four nephews, two great nieces and one great nephew. And a host of cousins, other relatives and friends.
All of Nikki Memories are forever etched in our hearts!
“Trust in the Lord with all your heart” Proverbs 3:5