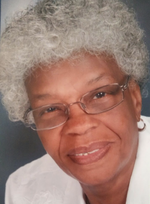 Ida Mae Wiltz Jackson, a native of Wallace, Louisiana but resided in Los Angeles, California, at the graceful age of 84 peaceful entered eternal life, on February 16, 2020.

She was born on August 6, 1935 in New Orleans, Louisiana, to Adlus Wiltz, Sr. and Leabora Clark Wiltz. The eldest of seven children. Ida was baptized and made her Holy Communion and Confirmation at St. Philips Catholic Church in Vacherie, Louisiana. She was united in Holy Matrimony to the late James Jackson.

She leaves to cherish her memory daughter, Venessa Maiden; son-in-law Eugene, her two son Vernon Muhammad and Tracy Evans; her 14 grandchildren, 14 great grandchildren and 2 great-great grandchildren, her brother Melvin and sister Eunice Wiltz, a host of loving and caring nieces, nephews and cousins.

She graduated from Second Ward High School in 1955.

She was a faithful member of St. Brigid Catholic Church, for over 30 years where she served several ministries.