To share your memory on the wall of Estrean Cannon, sign in using one of the following options:

Provide comfort for the family of Estrean Cannon with a meaningful gesture of sympathy.

Estrean was born on September 11, 1946 in New Orleans, Louisiana to the late Samuel and Marie-Louise Broyard. On April 26, 1969, Estrean was joined in holy matrimony to the late Brent James Cannon. She graduated from St. Mary’s Academy and attended Southern University in New Orleans. She worked as a computer programmer for a variety of companies in the New Orleans area. She was a loving wife, mother, sister, friend, an excellent cook, and crafter.

The family would like to thank everyone for their prayers, telephone calls, text messages. Special thanks to the doctors, nurses and all of the staff at the Ochsner Hospital’s for the that was care given to our love ones.

There will be a memorial service for all to attend at a later date after the pandemic passes.

Receive notifications about information and event scheduling for Estrean

There are no events scheduled. You can still show your support by sending flowers directly to the family, or planting a memorial tree in memory of Estrean D Cannon (Broyard).
Plant a Tree

We encourage you to share your most beloved memories of Estrean here, so that the family and other loved ones can always see it. You can upload cherished photographs, or share your favorite stories, and can even comment on those shared by others.

Posted May 17, 2020 at 09:45pm
So sorry to hear of the passing of Estrean. Yolona and Angela you are in our prayers and also her children and grandchildren. I remembered when Estrean and Brent met at my wedding on December 23,1967. A beautiful couple.
Comment Share
Share via:
HS

My darling cousin I will miss you on this earth, but I know our meeting in our new home will be a homecoming unlike no other! Love you always, Your cousin Brenda Lavizzo
JR

Posted May 17, 2020 at 09:52am
ANGELA & FAMILY,
OUR PRAYERS TO YOUR SISTER AND FOR YOU AND YOU FAMILY
MAY SHE REST IN PEACE.
FROM; JANET OLIVER ROCHON
Comment Share
Share via:

Posted May 15, 2020 at 07:20pm
I worked with Estrean at Union Carbide (Dow) in Taft, La. she was always pleasant to work with. She had a wonderful personality. My sincerest sympathy got out to the Family. Keep your trust in the Lord, you'll see her again. God Bless you Family. Bernadette Triche, AMA La
Comment Share
Share via: 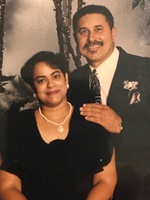 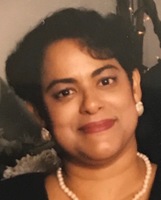