To share your memory on the wall of Elouise Johnson, sign in using one of the following options:

Print
Another link in the chain of the New Jerusalem family was broken when God called his beloved servant, Mother Elouise Johnson home on April 30, 2020.

Elouise Young Johnson was born October 3,1932. She was the loving Daughter of the late ... Read More
Another link in the chain of the New Jerusalem family was broken when God called his beloved servant, Mother Elouise Johnson home on April 30, 2020.

Elouise Young Johnson was born October 3,1932. She was the loving Daughter of the late Clarence Young, Sr. and Julia Clay Young. She was a loving sister to her siblings Ledger Smith, the late Alice Greenup, the late Sterling Young, Clarence Young and Edward Young, Sr.

Mother Elouise Johnson attended Second Ward High School where she received her diploma. She was a devoted and loving wife, mother, grandmother and great-grandmother. She loved traveling and sight-seeing with her family, but loved serving the Lord above all. She was a strong and faithful woman of God with love for anyone she met. She would go out of her way to help anyone in need. She was a homemaker who loved baking cakes and tea cakes. She would cook everything you could think of, including her specialties homemade eggnog, turkey with all the fixing, and gumbo on holidays. She was definitely an example of a Virtual Woman of God to everyone who really knew her. She was a very bright and shining light to her family and friends.

Mother Elouise Johnson accepted Christ as her personal Lord and Savior and was baptized at an early age at Second African Baptist Church in Edgard, LA. by the late Rev. Smith. After she was united in matrimony to the late Rev Dr. F. J Johnson, she later joined New Jerusalem Baptist Church of Edgard, LA, which was pastored by the late Rev. C. A. Washington, then her husband Rev Dr. F. J. Johnson, then under her son the late Rev. Dr. Joseph Johnson, Jr. She faithfully served as a deaconess on the deacon board, and was also a member of the Golden Link Society and the Eastern Stars. She continued to work as s deaconess under the leadership of Pastor K. Maurice Tillman of New Jerusalem B. C. until the day God called her home. We will always cherish and remember her favorite hymn “When you hear of my home going, don’t worry about me” and her favorite scripture “Pslam 23”.

“I have fought a good fight, I have finished my course, I have kept the faith”
Timothy 4:7

To send flowers to the family or plant a tree in memory of Elouise "Lou" Johnson (Young), please visit our Heartfelt Sympathies Store.

Receive notifications about information and event scheduling for Elouise

We encourage you to share your most beloved memories of Elouise here, so that the family and other loved ones can always see it. You can upload cherished photographs, or share your favorite stories, and can even comment on those shared by others. 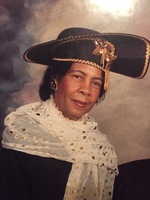