To share your memory on the wall of Dorothy Duhe, sign in using one of the following options:

Print
Dorothy Joseph Duhe was born on September 29, 1941 to the union of the late Olivia and Fred Joseph in New Orleans, Louisiana. On October 16, 2020, she departed her earthly life and gained her eternal wings.

Dorothy confessed her belief... Read More
Dorothy Joseph Duhe was born on September 29, 1941 to the union of the late Olivia and Fred Joseph in New Orleans, Louisiana. On October 16, 2020, she departed her earthly life and gained her eternal wings.

Dorothy confessed her belief in the Lord Jesus Christ at an early age. On June 22, 1952, she was baptized in the Mississippi River by the late Reverend George Washington of Plymouth Rock Baptist Church. During her Christian journey, she served many years as an Usher. Her service at Greater New Plymouth Rock Baptist Church as a faithful member under Reverend David B. Carter continued until her illness prevented her from attending.

Dorothy was an avid shopper and would spend countless hours shopping for clothes and shoes, and wouldn’t stop until she found as many bargains as she could. She was also a lover of hats; her collection was so large that she had a hat for every day of the year.

Although she had a tremendous love for shopping, her love of the New Orleans Saints football team far outweighed it. Every year she would always say that the Saints were going to the Super Bowl; long before they even had a chance of making it there. On the night of February 7, 2010, Dorothy was home alone watching the game that she had envisioned for so many years. It was her desire to watch it alone because she said she didn’t want to be distracted by ANYTHING.

She was preceded in death by her parents, Olivia and Fred Joseph ; 2 brothers, Junius Noel and Homer Joseph; one sister, Olivia Morris; one great- grandson, Kacen Charles; and her goddaughter, Toneka Walker Terry.

Family and friends are invited to attend a celebration of life on Saturday, October 24, 2020 at New Wine Christian Fellowship 1929 W Airline Hwy, LaPlace, LA 70068. Viewing will be held from 10am to 12pm, followed by a service at 12pm. Entombment to follow at St. Peter Catholic Church Cemetery in Reserve, LA. Final care entrusted to Treasures of Life Funeral Services, 315 E. Airline Hwy Gramercy, La. 70052.

To send flowers to the family or plant a tree in memory of Dorothy Joseph "Dot; Granny" Duhe, please visit our Heartfelt Sympathies Store.

Receive notifications about information and event scheduling for Dorothy

We encourage you to share your most beloved memories of Dorothy here, so that the family and other loved ones can always see it. You can upload cherished photographs, or share your favorite stories, and can even comment on those shared by others.

Posted Oct 24, 2020 at 01:02pm
To the family of Dorothy Duhe: My heartfelt sympathy goes out to you. Doit, as I called her, was my good friend even though we rarely saw each other in our latter days. We made plans to do things when in our hearts we new that we would never do, but the desire to do them were real . I will miss her. My love is with you Darlint’ Rod and Elois. ( Kisses!) Gayle Batiste
Comment Share
Share via:
CB

Posted Oct 24, 2020 at 12:17pm
Dorothy was always such a kind and loving person .It is my prayer that the Lord will continue to comfort, strengthen and Dorothy's family. Clara Belle Clark
Comment Share
Share via:
HS

Flowers were purchased for the family of Dorothy Duhe. Send Flowers

Posted Oct 23, 2020 at 09:28am
Sending love, positive vibes, and prayers. My deepest sympathies, I'm so thankful to have known Granny. Love you guys.

Posted Oct 22, 2020 at 11:23pm
Good bye my classmates take your rest won't have to complain no more the lord fix everything for you to the children and grands continue to hold on,to God unchanging hand Delo
Comment Share
Share via: 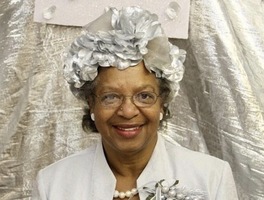