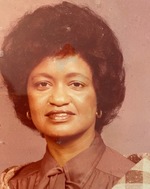 Diana was called home to eternal rest on Monday, April 27, 2020. Diana was born on April 18, 1942 to the late Aubrey Borne Sr. and Claire Borne, and was one of ten children. She was a native of Edgard, LA.

Diana attended Second Ward High, where she received her high school diploma. She was later certified in typing and also as a nursing assistant. Diana was employed at East Jefferson Memorial Hospital. During her time there, she helped many of her friends and relatives to gain employment. Diana was seen as a leader amongst many of her co-workers, speaking out on their behalf. She later retired after 30 years of service.

She was united in holy matrimony to the late Jerry John Dumas Sr. of Wallace, LA. From this union three children were born: Jerry John Dumas Jr., Trinell Lanae Dumas and their baby girl Genee Lashawn Dumas. Her husband joined the Airforce, and later studied at Nicholls State University.

Diana enjoyed traveling and sewing. She made a lot of her children’s clothing which were beautifully made. She also had a passion for shopping at various garage sales, where she would purchase items for herself and her family and friends that were in need.

Diana was a very beautiful, loving mother. She took on the role of mother and father after the passing of her husband Jerry John Dumas Sr. We will always be grateful for the experiences, the guidance and love she shared. Although she was a private person, she was very strong, determined and able to defend her position. She was very fashionable in both clothing and interior design. She had a very classy style.

She took care of her family so graciously, and we in turn will honor the legacy she left behind and do the same. She is gone but will never be forgotten.

The Lord gave me a sign that my mother was ok. When I asked him to send me a falling star out of the sky, and he provided it within seconds. So with that, God confirmed to me, her loving son, that she is resting well with Him.